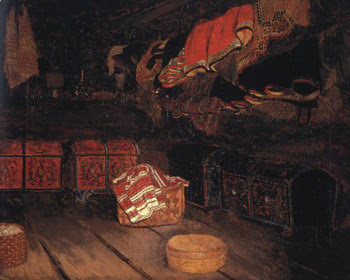 As with other folk arts in Norway, weaving was an integral part of life, both in terms of practical use and artistic expression, and a skill and art that was passed from mother to daughter in unbroken lines for hundreds upon hundreds of years. In Oleanna, weaving is an important skill, but also a way for Oleanna to connect with her mother.

Katherine Larson's excellent The Woven Coverlets of Norway (University of Washington Press, 2001) gives us a great background on the development of weaving in Norway and the difference vis-à-vis development in the rest of Europe.


Although much of western Europe witnessed the birth of the textile industry in the Middle Ages and the subsequent transformation of a home-oriented craft into a business run by professionals, in Norway the art of weaving remained firmly in the home. The challenging climate and difficult terrain of this rugged northern land fostered a hard life in which things of value were carefully preserved, and the natural conservatism of farming culture impeded the acceptance of new methods. Thus certain weaving tools and techniques that had largely disappeared centuries ago from homelife of France or England were still to be found in the early part of the twentieth century in Norway, preserved within the folk art of its farming community. (xiii)

A fantastic description of the development and maintenance of most Norwegian folk arts, actually.

Weaving was typically done on a warp-weighted loom, using materials gathered on the farm (wool, flax, herbs for dying) and largely for coverlets.


Apart from its eye-catching appeal, the coverlet had another, more solemn role to play. Birth, marriage, death--the passages of a person's life--all revolved around the family bed, and the coverlet assumed its proper place in these ceremonious occasions. (34)

There were six major types of coverlet designs throughout Norway, but


...interpreted in a variety of ways throughout Norway, hardly surprising when over a thousand miles of mountains, valleys, and fjords separate Kristiansand in the south from North Cape well above the Arctic Circle in the north. (37)

In Oleanna, I focused on the rutevev, because that was the predominant style of the Sogn region.


A sense of balance emanates from the rhythmic repetition of pattern in the rutevev, or square-weave coverlets. Stylized flowers, tiers of diamonds, convoluted knots, elaborate crosses: all the time-honored patterns set in orderly array must have suggested the presence of a similar orderliness in the pattern of one's life...Throughout the fjord and mountain country of western and southern Norway, the square-weave coverlet reigned supreme. (63)

Below is a rutevev from Sogn, in an alternating-color diamond pattern. The story I had from my mother is that this was woven by Elisabeth and Oleanna. Obviously, I treasure it. 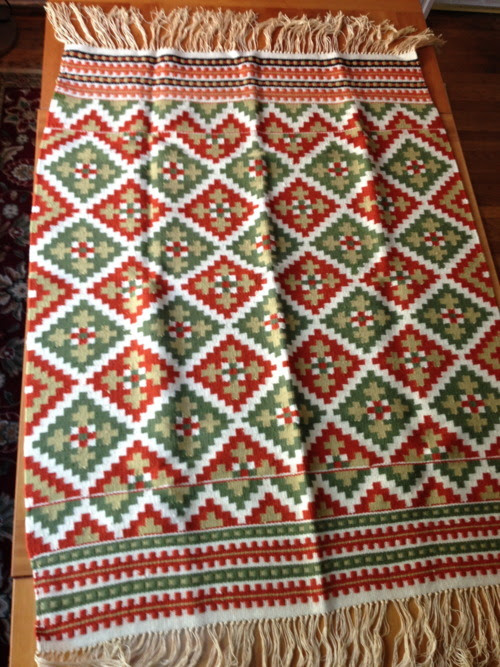 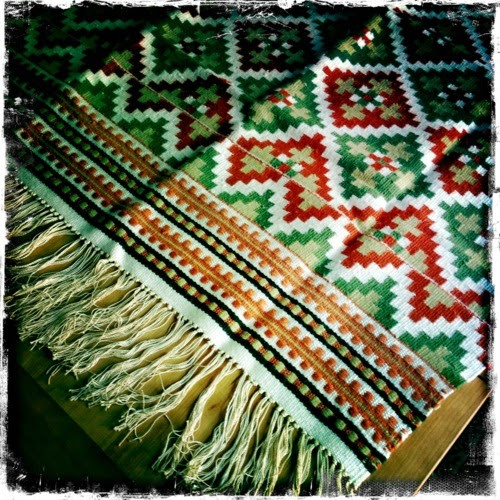