Rosemaling, or rose painting, is the decorative painting tradition of Norway. The form is based around flowers (stylized rose and other flowers), scrolls, and flowing lines and patterns. It is based on the baroque acanthus carving styles introduced to Norway in the 18th century, and developed primarily in Telemark and Hallingdal, but also developed in Setesdal, Hordaland, Sogn og Fjordane, and Rogaland.

The Illinois Norsk Rosemalers' Association provides an excellent succinct overview of rosemaling styles. This is also a great example of how Norwegian immigrants and Norwegian-Americans keep these folk traditions alive, and expand on them.

This decorative painting style is marked by a stylized, rather than figurative, approach. Any kind of surface can be rosemaled, but you often find drinking vessels, bent-wood boxes, and trunks. The Vesterheim Norwegian-American Museum in Decorah, Iowa has a fantastic online collection of examples of rosemaling.

In Oleanna, rosemaling is naturally a regular part of their lives, from John's traveling trunk to their mother's dowry trunk, and a surprise Anders gives to Oleanna. Rosemaling has been a part of my life for as long as I can remember. Below is an ale bowl and a bellows that I got from my grandmother. The ale bowl is in Telemark style, and I believe the bellows is in Rogaland style.  [NB: a very kind reader has pointed out that the ale bowl is actually Viksdal style, from an area southwest of Jølster. 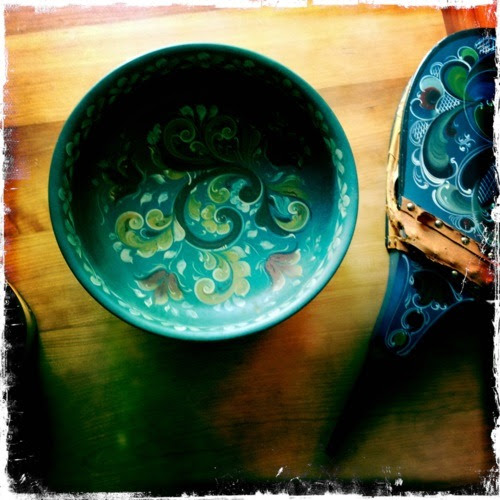 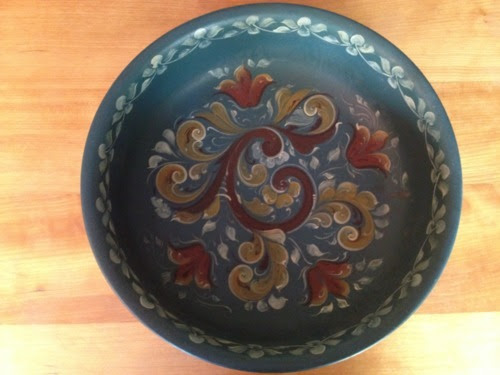 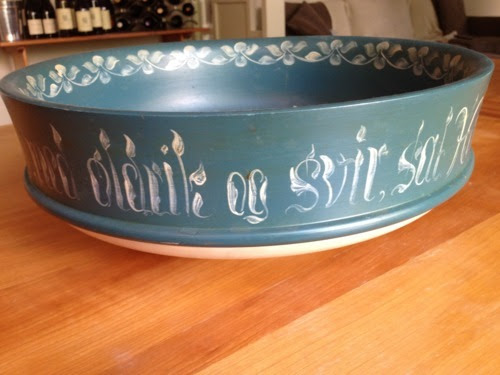 (though I think it should say Hallingdalens, but it sure looks like an "o"), which translates to (according to Google Translate!)


in those hard days, with oldrik feasting, Hallingdolens knife blood lost in his scabbard

I find it hilarious that we have had this ale bowl on coffee tables and sideboards for three generations, and no one had bothered translating this really rather brutal bit of verse! I'm guessing it's from a saga, or perhaps just some random bit of doggerel for tourist consumption? (Interesting side-note: Norway was a popular tourist destination, particularly travelers from the UK, not least due to the influence of the Baedeker guide to Norway, Sweden, and Denmark)


Regardless, the rosemaling itself is lovely (and I love the juxtaposition between the beautiful flowers and the bloody verse).

NB: Again, a very kind reader has pointed out that the inscription is actually from a poem--thank you, Eldrid, for sharing this information!!

It is the first lines from the poem Fanitullen by Jørgen Moe (of Asbjørnsen and Moe), based on a legend about a fight that took place during a wedding celebration resulting in the death of a young man.


I stick with my contention that it's a pretty bloody thing to put on a lovely bowl!
Posted by Julie K. Rose at 6:28 PM

Oleanna is available in paperback and a variety of ebook formats from: Amazon (worldwide); Barnes & Noble; Books-A-Million; Book Depository; iBookstore (worldwide); Powell's Books; and many other fine retailers.


(Links to all reviews can be found at my website)